Speaking the English? Why English Is so Difficult to Learn

Speaking the English? Why English Is so Difficult to Learn 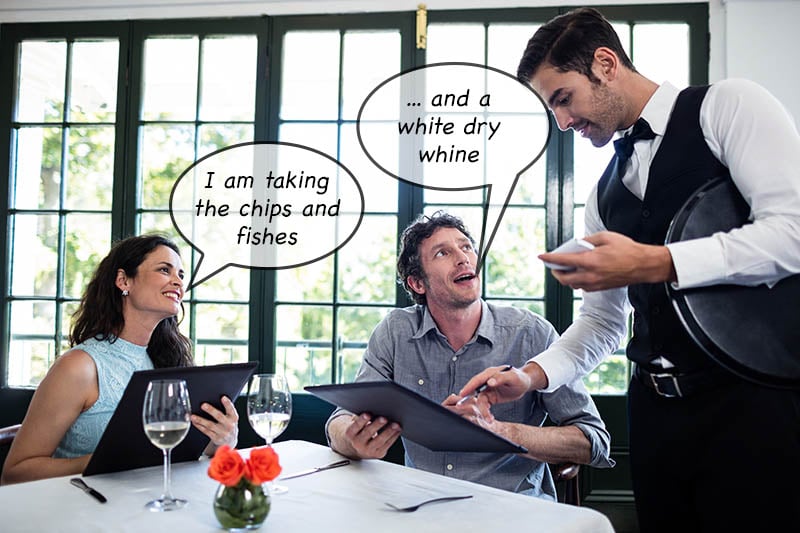 English is the official language of more than 50 countries and the lingua franca of international business, diplomacy, science and technology. Yet it is phenomenally difficult to master…

One of the great things about the King’s community is its openness; folks are pretty friendly. When I was a newbie, I was asked the usual questions about family, where I’d worked previously, how I was settling in – all sorts of things, including where I went to church.This was pretty important to me, as I’d come from interstate and was in the ‘church-shopping’ phase. At any rate, the person asking me the questions at the time, was able to indicate other people in the room and tell me where each worshipped. It’s almost currency here:

“That’s Paul. He and Shelley attend C3 at Currumbin.”

“Donna used to go to Mudgeeraba Uniting but they moved. I think they’re at Highway, now.”

There’s a natural curiosity that we have about others. It makes sense as we live in communities, in families; we work alongside people we may not know outside the workplace. My kids cringe as I investigate the background of almost everyone I meet, especially if there’s a whiff of an accent, any accent, or a name off-the-beaten-Anglo-track. It may be inherent nosiness, or the many years I spent with our indigenous people, to whom moiety is vital for ceremonial and conduct reasons. Whatever the cause, I loves me some prying.

We have a vibrant and growing international community at King’s. It’s just delightful to see students from many cultures, most with the common bond of shared love of Jesus. Even more wonderful are our international students, many of whom board with a host family, and do not travel home until the Christmas break. These young people are embedded in a family, a school, a community, where almost nobody they meet speaks their language. Imagine how hard that would be. Now add on learning English, THEN learning to study in English.

It’s a shame we sometimes use the term “broken English” to describe someone starting the language. We don’t say a toddler is “broken walking” because she is unsteady. I have a dodgy smattering of a few languages but know the embarrassing and public limitations of more complicated conversations than greetings and food orders. To me, someone struggling through spoken English is not only brave, but clever, to be admired. English is a very difficult language to learn as an additional language, only second to Mandarin/Cantonese. 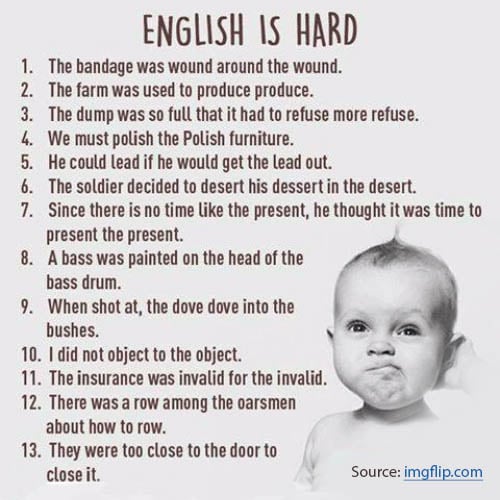 As a native speaker, it’s easy to dismiss or not realise the difficulties of English. Think of homophones like ‘wear’ and ‘where’, or the often-confused apostrophe of possession (it’s versus its). Or the NINE verb tenses. Or the idioms. And let’s not start on implied meanings and jargon.

Like all living things, language changes, it’s organic. Dead languages, like Latin, do not change because they are not in common usage. But, all languages in use change all the time. I now own a dictionary my grandfather had when he was a boy. It does not have the words “spaceship”, “computer”, or “television”. Similarly, words fall out of use all the time. Have you ever heard the word “gruntled” in everyday speaking (the opposite of “disgruntled”)? Or referred to a gullible person as a “sillytonian”? Some archaic words only exist because they are fossilised in sayings or idioms. When do you say “kith” without “kin”, and when is a “shrift” anything but short?

English is not the world’s most-spoken language: three billion Chinese say, “Nǐ hǎo!” But, it is the world’s second language. This can attributed to many things, including the British Empire’s global reach for 400 years, the printing press, colonialism, Christianity, democracy, rock’n’roll, and Hollywood. The ubiquity of international travel, thanks to the jet-engine, make many parts of the world attractive to travellers and hosts alike, often finding English their common tongue.

So, just why is English so hard to learn? Here are the reasons we’ve already suggested:

Source: ‘The Elements of Eloquence: How to Turn the Perfect English Phrase’ by Mark Forsyth

But, I guess, the question is how did this muddle come about? Why ARE there 10 ways to pronounce the sequence “ough” (cough, rough, plough, through, slough, though, hiccough, thought, thorough, lough)?! Why is the plural of house houses, but the plural of mouse is not mouses? How could anyone keep up with this?

The answer is nowhere near as complicated as the language itself. The simple answer is that English has many parents; that is, English words are formed in many ways. Let’s look at these, according to Bill Bryson, author of ‘The Mother Tongue: English and How It Got That Way’:

This mixed parentage leads to rules having many exceptions. That’s where the difficulty lies.  Let’s take a common example. The standard English plural of “octopus” is “octopuses”. However, the word “octopus” comes from Greek, and the Greek plural form is “octopodes”. Modern usage of “octopodes” is so infrequent that many people mistakenly create the erroneous plural form octopi, formed according to rules for Latin plurals. Many English words have Greek or Latin roots (etymology) but these have become almost interchangeable in common usage.

Another prickly example arises over the plural of “cactus” because its original plural form, “cacti”, derives from Latin, and native English speakers are drawn to “cactuses”, which adheres to the standard ruling for forming plurals (adding “es” after “s” finish). Both “cactuses” and “cacti” are acceptable. Of note, “cacti” is the more common plural because, as we said earlier, language is organic and changes with use.

So, the next time you hear someone struggling with English, be patient. After all, you were born with the advantage of hearing English since you were born. Remember: someone who is bilingual has already mastered one language. How about you?

The Rise of Project Based Learning (PBL)